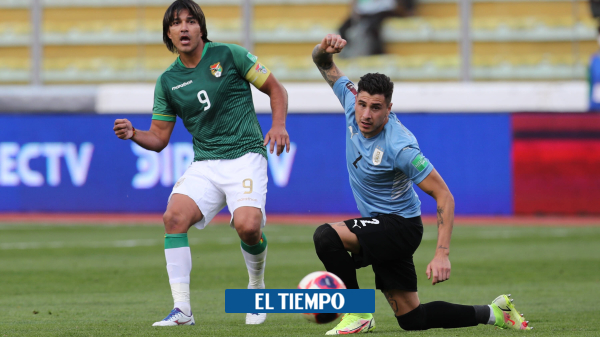 Bolivia he thrashed 3-0 this Tuesday at Uruguay in La Paz in the match that opened the fourteenth date of the South American qualifying round for Qatar-2022, he again fought a space for the next world and pushed the Charruas towards the cliff.

(You may be interested: Dani Alves passes the medical check-up in his new stage with Barcelona)

Green’s goals were converted by midfielder Juan Carlos Arce (30 and 79) and by the top scorer in the qualifier, Marcelo Martins, at 45. With his victory, Bolivia added 15 points to finish seventh, while Uruguay remained parked with 16 in sixth place.

The South American zone grants four direct tickets to the next World Cup and the fifth the chance of a play-off against a team from another confederation.

In the next double date, between the end of January and the beginning of February 2022, Bolivia visits Venezuela and receives Chile, while Uruguay will face Paraguay in Asunción and then will be local to Venezuela.

Bolivia entered the field true to its style, when playing at home: maximum pressure, in order to drown the rival, and with its midfielder Arce organizing the assaults on the Uruguayan fort and in a state of grace.

(Also read: Jordan accuses Iranian player of being a man)

Uruguay deployed a bolt in the defense, with its captain Diego Godín as the firm piece, but giving space from the middle sector.

At 27 minutes, Uruguay was close to surprising everyone, when Nahitan Nández fired, almost without a mark, although deflected, wasting a clear chance to score. But at 30, joy came for Bolivians, with another surprise.

Midfielder Arce threw a cross, apparently looking for forward Marcelo Martins, but the ball rebounded and fooled the experienced Fernando Muslera of Turkish Galatasaray, who made a huge mistake. At 45 Bolivia increased the score.

Arce took a corner kick and Martins converted the second goal with a header. The Bolivian striker also increased his personal score in the tie to 9 points, to continue as his top gunner.

Luis Suárez was not enough

At the start of the second half, Uruguayan coach Oscar Tabárez ordered the entry of star Luis Suárez and Giovanni González, replacing Joaquín Piquerez and Matías Vecino.

(Also read: Lionesses are offered an academic scholarship after going to the Cup final)

It was necessary to unbalance the figures and regain the initiative. With the adjustments the Uruguayan team showed another face: more offensive and closer to obtaining their first goal. At 60 the Brazilian referee Wilton Sampaio charged a penalty in favor of the locals, after a foul committed by defender González, but the gunner Martins missed, shooting over the crossbar.

Suárez moved the attack, but it was not enough. Although the game leveled off, Bolivia scored the third goal at 79, through Arce with a header, in a day to remember. Bolivia, thus, ratified its supremacy as a local against Uruguay.

Of the 11 matches played until this Tuesday at the Hernando Siles stadium between the two combined, for the elimination phase since 1961, the ‘Green’ has won in 6, another four have been tied and only one in favor of Uruguay: a 2-0 in October 2015. The team led by Tabárez accumulated its fourth defeat in a row on the road to Qatar-2022, which is getting increasingly uphill.

Previous news, requirements and how to download it
Next Create a healthy plate for the person you care for