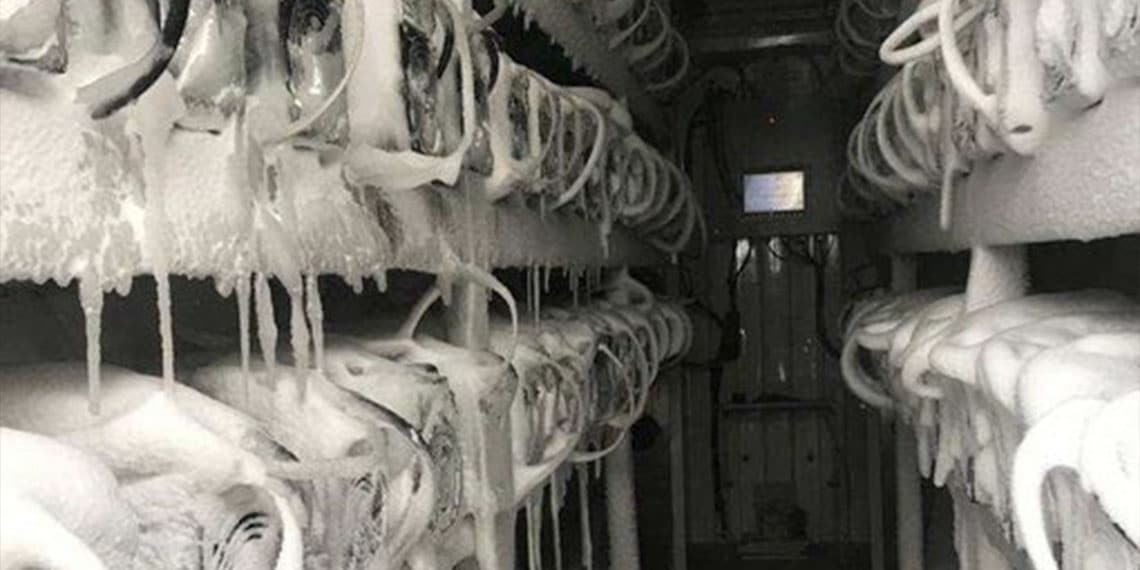 Bitcoin hashrate falls due to extreme cold in the United States

Winter storm Elliot, one of the strongest on record in the United States and which marked temperatures close to -40 °C, has caused the Bitcoin hashrate to fall 36% between December 23 and 25.

According to recent data, the bitcoin hashrate fell back over 175 EH/s, values ​​not seen since last August.

Reports indicate that the winter storm has knocked out electricity to more than a million homes on US soil. Due to this weather event, the electricity demand has increased, which is why Bitcoin mining farms have been affected.

Riot Blockchain, one of the main mining farms in the country, advertisement this December 21 that, motivated by the extreme conditions, they would close their operations in Rockdale, Texas, to provide security to the state electrical network.

The relationship between blackouts in the US and the fall in hashrate is due to the fact that, according to data from the Braiins portal, the US has 29% of the global hashrate.

As CriptoNoticias has reported, this It is not the first time that Bitcoin mining farms have turned off their equipment. In February of this year, farms in Texas and Iowa took their equipment offline to reduce loads on the electrical grid due to a deep freeze.

Other possible causes that contributed to the decline in the Bitcoin hashrate was the bankruptcy of Core Scientific, one of the largest miners worldwide. At the time of bankruptcy, it operated close to 143,000 mining equipment, thus owning around 10% of the network’s mining power.

For the moment, Bitcoin hashrate had a 30% recovery positioning itself on 226 EH/s, this December 26. However, the so-called “winter bomb” is expected to last until at least January 2, so other pullbacks can be seen within the Bitcoin hashrate chart.

On the network, although it was a considerable setback, Bitcoin continued to function normally. There were no congestions or significant delays in the Bitcoin mempool on these Christmas dates.

Dennis Porter, CEO of the Satoshi Action Foundation, praised how a decentralized network such as Bitcoin, to which 30% of its capacity is disconnected, continues to operate normally.

The shutdown of Bitcoin mining equipment to protect the electrical network, It is an emergency measure in the face of the historic snowfall. However, options have been developed to take advantage of the heat generated by this type of equipment.

In 2018, the first home heater designs that functioned as Bitcoin miners were developed.

In Siberia, the Hotmine startup launched a prototype of heating equipment, powered by Bitcoin mining equipment, taking into account that this area registers average temperatures between -30 °C and -40 °C.

In France, the Hestiia company has also developed heating equipment that, in addition to regulating the temperature in homes, allows bitcoins to be mined in the process.