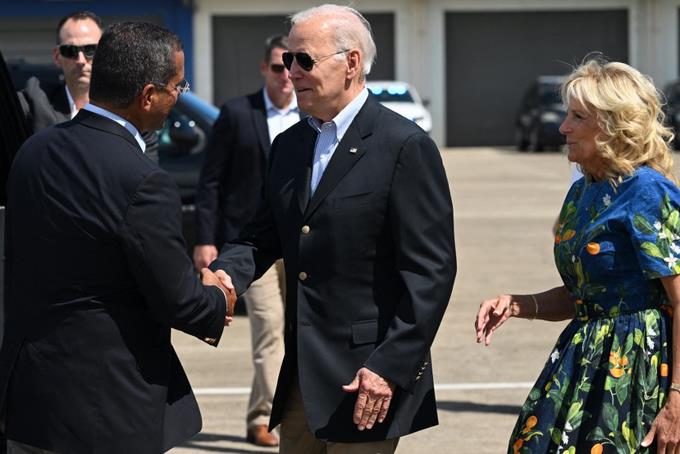 The president of the United States, Joe Biden, landed this Monday in the city of Ponce, in southern Puerto Rico, to assess the damage caused by the recent hurricane fiona and show your support for the island.

In his first official trip as president to Puerto Rico, which lasted about three hours, Biden was received at the Mercedita international airport by the Puerto Rican governor, Pedro Pierluisi; the mayor of Ponce, Luis Irizarry, and the resident commissioner in Washington, Jenniffer González, among others.

The president is going to visit the Centro Sor Isolina Ferré Aguayo school and, accompanied by the American first lady, Jill Bidenwill meet with families and community leaders affected by the hurricane that, since it hit the island on September 18, has caused 25 deaths.

The US government spokeswoman, Karine Jean-Pierre, explained at a press conference aboard the Air Force One presidential plane, en route to Puerto Rico, that the president is going to the part most affected by the hurricane.

“It’s an area that presidents haven’t gone to before and I think it shows the president’s commitment and of the first lady with the people of Puerto Rico,” he stressed.

Before leaving, Biden told reporters at the White House that he is traveling to the island because “he hasn’t taken much care of them (Puerto Ricans).”

His predecessor in the White House, Republican Donald Trump (2017-2021), was the protagonist of numerous insults to Puerto Rico, even assuring during a visit to the island in 2017 that the disaster caused by the hurricane maria of that year was not “a real catastrophe”.

Biden is scheduled to announce during his visit to the island more than $60 million in funding for projects that mitigate flooding in the event of hurricanes.

These funds, granted through the package of infrastructures approved at the end of 2021 by Congress and signed by Biden, have the objective of securing dikes and strengthening walls against flooding in Puerto Rico, which is a free state associated with the United States.

It will also herald a new government-wide effort to make the island’s power grid more secure and resilient, after Fiona damaged more than half of the transmission lines and distribution feeders and would cause a general blackout.

Previous Megan Fox renews her image and is compared to Barbie for her new ‘look’ | United States | USA | USA | celebrity | rmmn | TVMAS
Next In Cumbayá, criminals took seven gold bars from a vehicle; car used by antisocials had been stolen and would belong to the Vice Presidency | Security | News