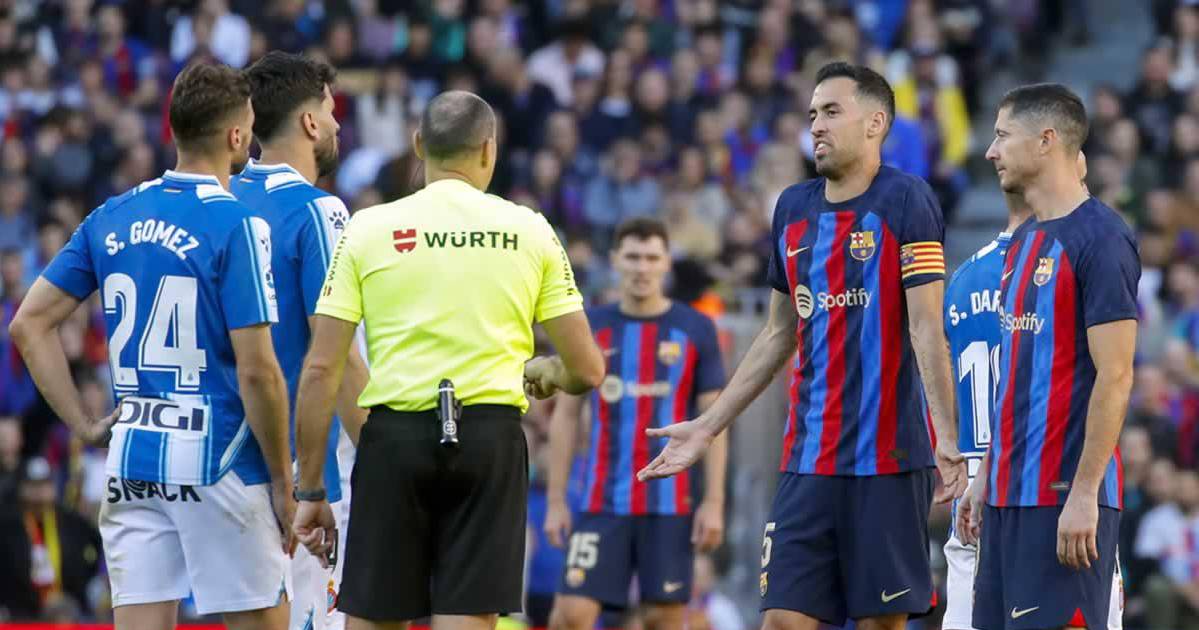 Barça gets stuck against Espanyol in a derby with controversial arbitration

Barcelona and Espanyol tied (1-1) a derby that began resembling a pre-season match, after the break for the World Cup in Qatar, and that the blue and white equalizer penalty goal in the 73rd minute and the referee Mateu Lahoz set fire to the final stretch.

Barça took the lead after 7 minutes, thanks to a goal from Marcos Alonso, today Andreas Christensen’s partner at the backbone of Barca’s defense, and controlled the duel at will during the first half.

But he lost steam as the minutes passed and ended the game by attacking desperately in search of the winning goal in added time, when both teams already had a man less due to the expulsions of Jordi Alba and Vinicius de Souza.

The precautionary suspension of the sanction to Robert Lewandowski by the Central Court of Contention of Madrid that allowed the Polish striker to play this Saturday caused the blue and white club to decide not to bring institutional representation to the derby, in protest.

A bitten shot by Nico Melamed that narrowly went wide, after bouncing off Sergi Roberto in a fleeting game against the visitor, was the only arrival for Diego Martínez’s team in a first half dominated by Barça.

However, Xavi Hernández’s men were only able to pierce Álvaro Fernández’s goal once at the start of the game. After 6 minutes, Gavi warned for the first time by winning the back of the doubtful blue and white defense and finishing off a cross from Jordi Alba that forced the visiting goalkeeper to show off, who sent the ball to a corner.

Marcos Alonso himself was able to score the second shortly after, but he finished off high, in front of the goal, a cross from Jordi Alba on the left.

A shot from Ansu Fati that couldn’t find the thread and another two from Raphinha that met Álvaro Fernández could also have increased the score for the Catalans, but the duel reached half-time without further developments on the scoreboard.

The game was very different after the break. Barça no longer governed the game with such authority, although it was still the closest to the goal.

Sergi Roberto and Lewandowski tried with both deflected headers, before Xavi decided, after half an hour, to change ends. Thus, Raphinha already sat down with a very imprecise Ansu Fati this afternoon, to give entry to Ferran Torres and the unpredictable Ousamen Dembélé.

But a stomp on Joselu from behind by Marcos Alonso when he entered the area changed everything. Joselu himself, with whom his teammates had not been able to connect in the whole game, deceived Ter Stegen to tie the game at 73 minutes and celebrate the Camp Nou by keeping quiet. And from then on the party went up in flames.

Mateu Lahoz sent off Jordi Alba, in four minutes, for protesting, and also Vinicius de Souza shortly after, also for a double warning. And the VAR corrected its decision to send Leandro Cabrera for a direct red card for a non-existent attack on Lewandowski.

The match was rough, with constant protests, interruptions and Mateu Lahoz facing each other, and that also raised the temperature in the stands of the Camp Nou.

In that scenario of ten against ten, Barça regained control and had three clear chances to win the game in the final stretch. But Álvaro Fernández flew to neutralize a header from Christensen that slipped past the strain of the right post and avoided another Barça goal in a one-on-one with Lewandowski. Pedri also had the last one in added time, but his shot from the edge went wide.

The tie in the last derby of 2022 gives some oxygen to a Espanyol that also recovers self-esteem after a very irregular first half of the season and keeps Barça in the lead, although now tied on points with Real Madrid, and with a better ‘goal average’ .

Incidents: LaLiga Santander matchday 15 match played at the Spotify Camp Nou in front of 88,095 spectators. Before the match, Barça’s Robert Lewandowski and Pablo Páez ‘Gavi’ offered the fans the Golden Boot and the Golden Boy, respectively. And a minute of silence was observed for the recent death of former Brazilian soccer player Edson Arantes do Nascimento ‘Pelé’.

Previous 6 settings I always configure on my new Android
Next Headache, tooth decay and heat stroke: the first illustrated medical dictionary for children is launched