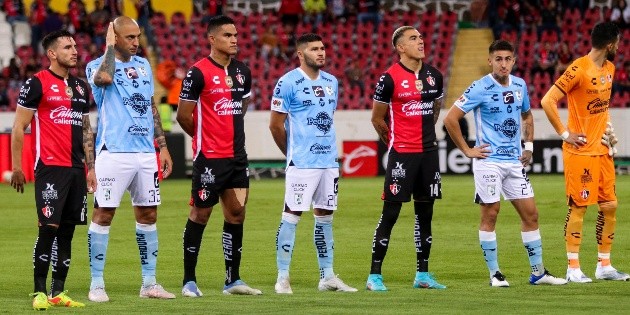 In a match marked by arbitration controversy and with errors for both sides, Atlas manages to get out of the losing streak thanks to the 3-1 victory against some Roosters who have 41 games without a visitor victory.

The Atlas goals were from Luis Reyes, Ozziel Herrera and Julián Quiñones. Ángel Sepúlveda had previously advanced the Roosters.

Ocejo gives the ball to Julián Quiñones inside the area and the Colombian sent it to the back of the net.

Ozziel Herrera hits him from long distance and the ball slips into the back of the net despite Toño Rodríguez’s shot.

Luis Reyes takes the maximum penalty in an exceptional way with a lot of power and leaving Toño Rodríguez without a chance.

Ocejo is knocked down inside the area and Fernando Guerrero does not hesitate for a second, a penalty for the Rojinegros.

Barbona looked for the base of the left post and with an excellent shot Camilo deflected it towards the corner kick.

Start the second half

Fernando Guerrero gives the whistle and the actions resume on the field of the monumental Jalisco Stadium.

The first 45 minutes of a game won by the Roosters are over and very warm, and Atlas plays it with ten.

Ángel Sepúlveda gets up inside the area and with an accurate header makes the red and black nets dance.

Sepúlveda left alone against Camilo and Martín Nervo knocked him down to cut off the play.

Fernando Guerrero checks in the VAR and sends it to the showers.

Martín Nervo stretched out on the far post and hit a spectacular header that Toño Rodríguez managed to stop with a great throw.

Fernando Guerrero blows his whistle and the ball begins to roll on the field of the Jalisco Stadium.

To safeguard the fan!

From the air, the Zeus aerotactic team of the Guadalajara Police joined the surveillance device in the vicinity of the Jalisco Stadium for the safety of those attending Atlas vs Querétaro.

The Gallos want to get their first win in the tournament and Mauro Gerk entrusts himself to the next starting eleven.

Diego Cocca moves him to his starting eleven with the aim of changing the negative inertia that the team is dragging.