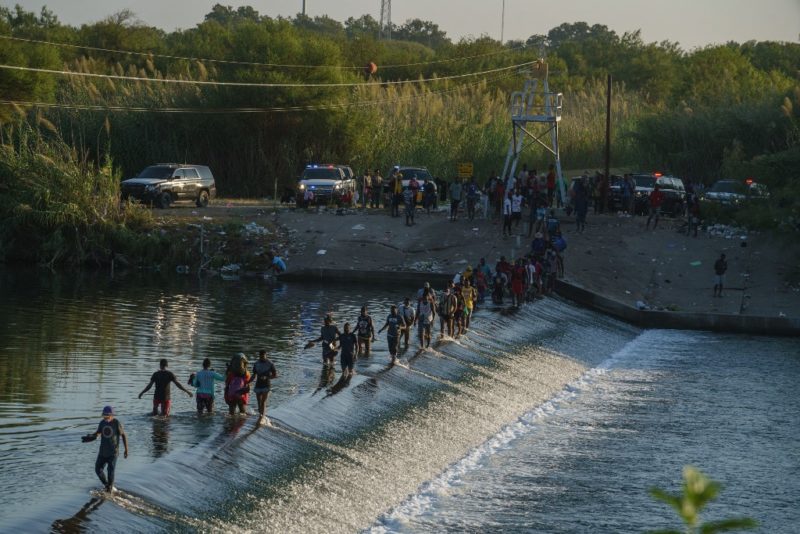 As Nicaraguan migration to the United States increases, so do deportations

While thousands of Nicaraguans flee their country as a result of the intensification of the socio-political and human rights crisis carried out by the Daniel Ortega regime, the United States Government, led by President Joe Biden, has begun to deport record numbers Nicaraguan migrants, sAccording to data reviewed by the Reuters news agency.

Reuters indicates that the number of Nicaraguan immigrant cases waiting to be heard by U.S. judges rose from 4,145 in 2018 to more than 34,000 last October, according to data provided by the Transactional Records Access Clearinghouse of Syracuse (TRACS), a research group in Syracuse University. He also explains that more than 19,000 of the cases were added during this year, however, he warns that most of them end in deportation.

“These deportation decisions coincide with the repressive situation in the country. Many of these cases correspond to asylum applications in a state of lag of up to ten years, however, the departure of any Nicaraguan who recently applied for asylum puts them at risk, “says Manuel Orozco, Director of the Migration and Development program at Dialogo Inter -American.

Also read: The United States suspends entry to all officials of the Ortega regime

Official United States documents updated until 2020 indicate that in that year a total of 1,416 Nicaraguans were deported from that country. During 2018, the lowest number of deportations was registered, which was 879 nationals, however, the highest number was in 2019, when 2,240 citizens were deported.

Recently, US President Biden, in response to Ortega’s re-election after the holding of the controversial elections, which he described as “pantomime,” hardened his foreign policy against the entire leadership of the Ortega regime. It barred all government officials from entering the United States, starting with Ortega and his wife and vice president, Rosario Murillo.

According to official numbers from the United States Customs and Border Protection Service, from October 2020 to September 2021 (a full fiscal year), the number of Nicas captured while illegally crossing the border of that country increased by 50,722, an increase of more than 1,500% compared to fiscal year 2020 when 3,164 were found.

Although in 2020 the situation was different due to the coronavirus health crisis and the restrictions that began to be implemented since the virus spread around the world, some months of fiscal year 2020 were in 2019, when the pandemic had not yet started.

For the fiscal year 2022, which began last October, the numbers do not give truce: 9,256 Nicaraguans found irregularly at the US borders. This represents almost 1,900 more people than the previous month and became the third month of the entire calendar year 2021 with the most meetings, only surpassed by July with 13,509 and by August with 10,024.

The exodus of Nicaraguans increased since 2018, after the brutal repression carried out by the Daniel Ortega dictatorship against opposition citizens, but in 2021 the migratory flow increased rapidly after the wave of kidnappings of political leaders and citizens who oppose the regime, the lack of of job opportunities, the economic crisis and the uncertainty of what could happen in this election year.

It may interest you: Who are Ortega’s allies in the hemisphere in the face of the resignation of the OAS?

Astrid Montealegre, immigration lawyer and specialist in Human Rights, argues that the increase in deportations of Nicaraguans is not a new policy of the United States, because “this increase is linked to exiles who are coming to the country without having their prepared asylum cases. ‘

He adds that many Nicaraguans emigrate thinking that just because they are Nicaraguan and because of the political situation in the country, “they will have the right to request asylum, but unfortunately it is not, they have to have an asylum case and have proof of that they are victims of persecution or that it is probable that if they return to their country they will suffer some kind of torture. If they do not meet the requirements, they are “automatically deportable.”

Also read: What awaits Nicaragua when it withdraws from the OAS? Analysts explain

Montealegre considers that the abrupt increase in arrests of Nicaraguan citizens who intended to enter the United States is directly linked to the electoral result of Nicaragua and the increase in sanctions against officials of the Ortega regime.

“As we have this crisis of Nicaraguans who are seeking to go into exile in the United States, deportations increase proportionally. This is directly due to the actions of Daniel Ortega, not of the Biden Administration because they are a continuation of the policies of Donald Trump – former US president – who has even been criticized for this, for not making the reforms that he promised during his campaign ” , says Montealegre.

The lawyer and expert listed that there are two policies in the United States that are directly affecting Nicaraguans: the first is the Migrant Protection Protocols Program (MPP) which obliges migrants to remain in Mexico while they await the asylum application; and Title 42, in light of the covid-19 pandemic, the US government over the last year and a half has executed almost 1.3 million expulsions of migrants at the border without offering them the opportunity to request asylum or other humanitarian protections.

How to categorize Nicaraguan migrants?

For Tiziano Breda, analyst for Central America at the International Crisis Group, the increase in deportations of Nicaraguan women by the United States is something “natural” based on the increase in nationals to the southern border of the North American country. “With them, unfortunately, deportations begin to increase, it is a bit to decompress, lower the pressure on the border areas and in particular the structures where migrants stay while they request asylum”, indicates Breda.

However, in his opinion there is currently a problem that the Biden Administration should address based on the recognition and gravity of the situation in Nicaragua, and that is “how to consider” the people who are increasingly trying to reach the United States. by land, because they are fleeing the situation of the socio-political, economic and humanitarian crisis.

Also read: Who could be the “non-governmental persons” whom the US included in the list to be banned from entry?

“The Biden Administration fears that based on this assumption – Nicaragua crisis – a kind of ‘preferential’ treatment would be established for Nicaraguans, allowing them more access to asylum requests or increasing the possibility that they will win them or other mechanisms. I think the Administration fears that this could cause some kind of call effect —The possible massive arrival of new illegal immigrants— raising expectations that there are more possibilities in the United States, and fueling a flow that is already at its historic peak, is fueling a very strong border crisis that has a political cost », Says the analyst.

For Manuel Orozco, “it is an important alert” that all these Nicaraguan exits are taking place in the midst of the repression that the country is experiencing. “It can be seen that migration to the United States grows in line with the wave of repression.”

“The United States government will be evaluating these requests more closely and contextualizing the cases in relation to what is happening in the country. Asylum approval rates are already growing, “he says, which is an indicator that confirms that the reasons for leaving Nicaragua correspond to the fear of being persecuted for their political or religious beliefs,” as is happening in Nicaragua. .

Previous Carmen Salinas: What is Camelita’s health status TODAY, Monday, November 29?
Next This is the fan project that wants to recreate the original Mortal Kombat at 4K and 60 fps