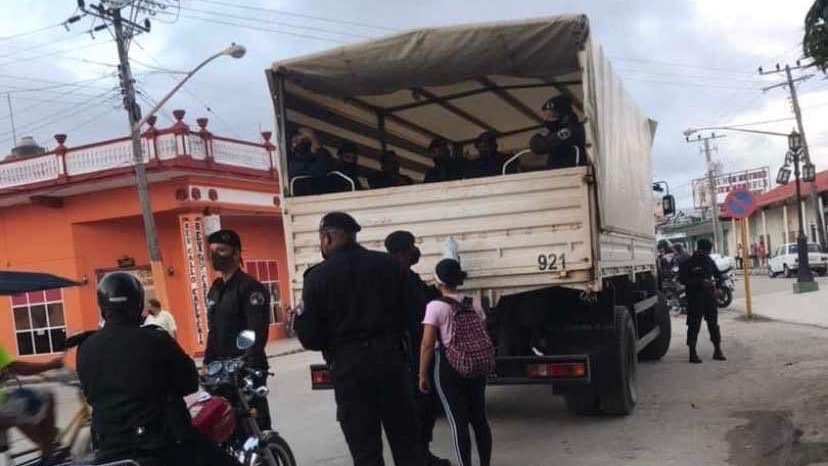 The Repression in Cuba does not stop due to the proximity of the Civic March for Change, called for this Monday November 15 inside and outside the island. Cubans denounce disappearances, arrests, threats So what internet cuts begin to prevent communication.

The civic platform Archipelago declared What her moderator Daniela Rojo disappeared in Havana after being held incommunicado with her family and friends for more than 24 hours. “After several people showed up at the Guanabacoa Police Station asking for Daniela, we can affirm that she is officially MISSING. We hold the Cuban regime responsible for the life of Daniela Rojo“they said on Facebook.

Carlos Ernesto Díaz González, a member of the Archipelago, was kidnapped this Saturday around 11:00 AM by four plainclothes agents in Cienfuegos, “while he was going to buy cigarettes in his neighborhood,” Professor David Martínez Espinosa denounced on Facebook.

Martínez said that “later three agents of the MININT (Ministry of the Interior) went to ask Carlos’ wife, Adianes Delgado Hernández, to appear at the Technical Investigations Department (popularly known as’ Todo el Mundo Canta ‘) located in Pueblo Tap, to bring toothpaste, toothbrush, among other belongings to her husband. “

“The reason for Carlos’ arrest, according to the agents explained to his wife, was because ‘Carlos had put up posters in the hospital.’ When she told him that this was a false accusation, they told him that “They were investigating him,” for which they had 72 hours, a time that coincidentally ends on November 16. In this way they prevent Carlos from participating in the 15N demonstration.“he added.

“This harassment is part of the actions of police harassment and intimidation that the repressive forces are exercising against those who have declared their decision to participate in the 15N march. We demand the cessation of these harassment actions carried out against Carlos Díaz and other Cuban citizens who are only exercising their universally recognized right to demonstrate and express themselves freely, as well as their immediate release, “he said. David Martínez Espinosa, one of those expelled from his workplace in Cuba for supporting the 15N march.

Jose Carlos Melo Gonzalez He was released this Saturday after his mother and friends showed up at a Havana Police station. “My people, thank you to everyone who cared. I’m already home. But I’m at home thanks to my mom and my friends who went to give Zapata and C the watercress, and they did not leave her alone and all those who gave visibility to my case, “he said in Twitter.

Melo’s mother said she would stay outside the station until God willing. “I’m fine, I’m strong. I know we’re going to win. I’m convinced, I’ve been saying it all the way, I talked about it with the driver who brought me. What the people are very afraid of. People are afraid of losing the garbage they have“he said before his son was released.

The rapper Omar Mena denounced this Saturday from Santa Clara the threat received by State Security after its second arrest in two days. “Today a State Security official told me that ‘those who disagree with Cuba are not the majority but the moment you are the majority we will take care of killing them. How? I don’t know, cutting their throats, shooting them down, I don’t know, but we have to match the thing ‘. With those same words they said it. “

The sister of Andy García Lorenzo, one of the Cubans arrested after the protests of July 11 in Santa Clara, said García denounced from prison that the riot guard is mobilized to prevent a revolt. “He was able to see some of their training. He says the uniform and all the equipment is brand new.”

“The Counterintelligence told the heads of prisons to improve everyone’s behavior, they are to the point of picking up even the spoons because they do not want anything to be armed for them. They only let the prisoners have plastic things. “García said they” want to divide “opponents arrested on J 11, added Roxana García Lorenzo.

The writer Rafael Vilches denounced in a Audio to independent publication Inverted tree that his house in Las Tunas is being besieged “By the same person who kidnapped me the other day. The car and several motorcycles are parked on Villamar Street, Joaquín Agüero corner, where I live. They are filming my house, someone told us, I went up to the plate and saw them and on when they saw me they hid “.

“The director of the radio station, where my wife works and that the director threatened that she was going to throw her out so that we would starve, you just made an appointment for an urgent meeting. It seems that they wanted to disappear her first to leave me weak, “he added.

The actor Edel Carrero counted that he was warned not to march on 15N because “if they are not going to take action” in a interrogation at the Zanja police station in Havana. “They didn’t mistreat me or anything. It was simply to say that the march is sponsored by imperialism, that it is interference, that Yunior (García Aguilera) has connections with the CIA, that they want the best for the people. , that worn-out speech of the regime. “

The journalist Abraham Jiménez Enoa denounced that “Police, military and agents disguised as civilians, like hunting dogs, guard the streets of Havana. It is Saturday night and already several activists and journalists are under siege so that tomorrow they cannot leave their homes. The internet in Cuba is already starting to fail, as expected in the hours leading up to the 15N protests.

From Pinar del Río, Leonardo Fernández Otaño denounced: “My house is surrounded by State Security agents and a police car. The sad thing is that they can be my parents or brothers. “