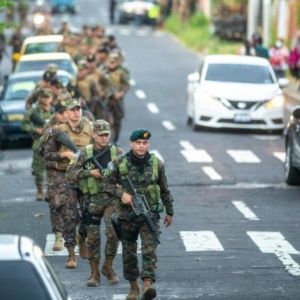 Army and police set up a siege in Tutunichapa, San Salvador | News

A new military and police siege in the community of Tutunichapa, San Salvador, began this Saturday as part of the government’s war against gangs, authorities reported.

President Nayib Bukele reported, through his Twitter account, that as of this morning, the Tutunichapa community in San Salvador is “totally surrounded” by more than a thousand security agents.

The Government deployed more than 1,000 soldiers and 130 police officers with the aim of “removing” all the suspected criminals residing in the sector.

#The Savior Elements of the army and police keep the Tutunichapa community in San Salvador surrounded, characterized by drug dealing.
1,000 soldiers and 130 police seek to extract the criminals that remain in this community. @telesurtv pic.twitter.com/Si4AMttGvX

More than 15 men and three women have been detained by the authorities in the operation carried out in the Tutunichapa Community in San Salvador.

These actions are part of Phase 5 of the Territorial Control Plan that the Government of President Bukele is executing to extract all gang members.

In the government order it was indicated that “they will extract the criminals that still remain in this community, famous for drug trafficking” with strategies in the different communities such as registering and requesting documents, preventive measures in public transport, house-to-house searches, among others.

“We are going to extract all the terrorists and criminals that hide in this community so that they pay for each of their crimes. Our good people deserve to live in peace,” said the Minister of Justice and Public Security, Gustavo Villatoro.

At the end of March, when El Salvador recorded 62 homicides in just one day, the country’s Legislative Assembly approved a state of emergency that has been extended over the months, culminating in the arrest of more than 57,500 suspected gang members

This measure has served the country, and specifically President Bukele, criticism not only from national opposition sectors, but also from a large part of Human Rights organizations, which warn of arbitrary detentions and lack of guarantees for prisoners.