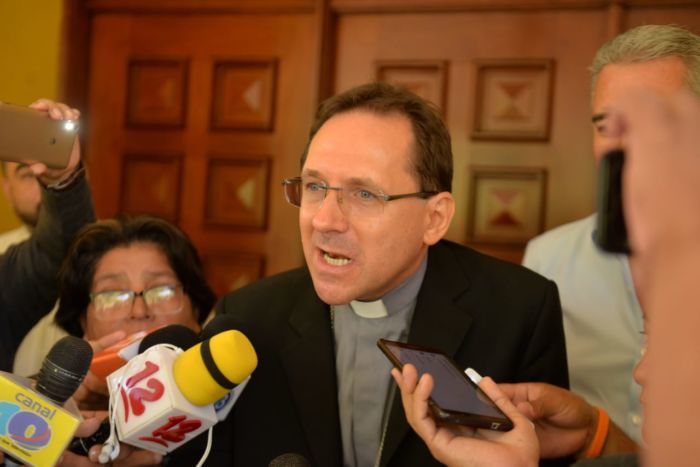 After several months of not appearing in the public arena, this Tuesday, November 30, the Apostolic Nuncio in Nicaragua, Waldemar Stanisław Sommertag, assured that the Holy See “intercedes” for the release of all those detained for political reasons in the country, however, he stated that he has not received any response from the authorities.

“The Holy See and of course this Apostolic Nunciature, from the first moment of my mission in Nicaragua, we are interceding in favor of the most vulnerable, including detainees of all categories, including politicians,” Sommertag said in an interview with the agency newsworthy Associated Press (AP).

You may be interested: “Christmas without Political Prisoners”, the demand from relatives persists

The statements of the representative of Pope Francis in Nicaragua come a day after the Civic Alliance together with the relatives of the prisoners and political prisoners affirmed that they would seek the support of the Catholic Church and the nuncio to achieve the freedom of their inmates from consciousness, on Christmas Eve. Currently there are more than 160 prisoners of conscience, according to the Inter-American Commission on Human Rights (IACHR), which includes the more than 40 detainees in the last six months, including seven presidential candidates.

The nuncio said that so far he has not received from the opposition organization and the relatives of the political prisoners “any specific request.” The representative of the Holy See in Nicaragua during 2018, the year that the socio-political crisis broke out in the country, intervened for the release of more than 100 opponents arrested for participating in anti-government protests.

“Liberation would be a good start”

The nuncio commented that he is in communication with the relatives of political prisoners in Nicaragua and said that “several relatives contact me individually and update me on the conditions of their loved ones.”

He added that in his opinion “interceding” for prisoners of conscience is the “most just and necessary” thing, however, he maintains that “in the end we know very well, things depend on the government. Releases would be a good start. To intercede means to wish… in this case the freedom of all. We put all our hope in God.

Sommertag did not stop advocating for political prisoners on December festivities to be reunited with their families. “We are all going to be with our loved ones on these dates and we also wish it for everyone, including the detainees,” he told the news agency in the interview.

Regime erased the figure of dean of the Nuncio

Recently, on November 17, the regime of Daniel Ortega annulled by decree the figure of Dean of the Diplomatic Corps, which corresponded to occupy the appointed apostolic nuncio and also delegated to the Ministry of the Interior the function of granting diplomatic, official and official visas. courtesy, and process the accreditation certificates.

The decree that preceded it, issued in 2000 by President Arnoldo Alemán, also granted the rank of Dean to the representative of the Vatican.

Article 6 is amended, which previously established that “the Government of Nicaragua recognizes as Dean of the Diplomatic Corps the Apostolic Nuncio of His Holiness, and in his absence, the Ambassador who has been accredited with the greatest seniority.”

Now it establishes that “in order to comply with the Vienna Convention, which in its article 14 establishes that no distinction should be made between the Heads of Mission and that calls for equal treatment among all, the figure of Dean of the Corps is annulled. Diplomatic”

In this regard, Sommertag said that “the Holy See cannot be upset because it is not his right to occupy the post of dean of the diplomatic corps and of course he does not seek privileges. It is the governments (those) that exercise their free right to hand over the dean of the diplomatic corps or to a nuncio or to the oldest diplomat, according to Article 16 of the Vienna Convention.

Previous December will be the best month of 2021 for 3 zodiac signs
Next Corporate wellbeing, a tool for growth