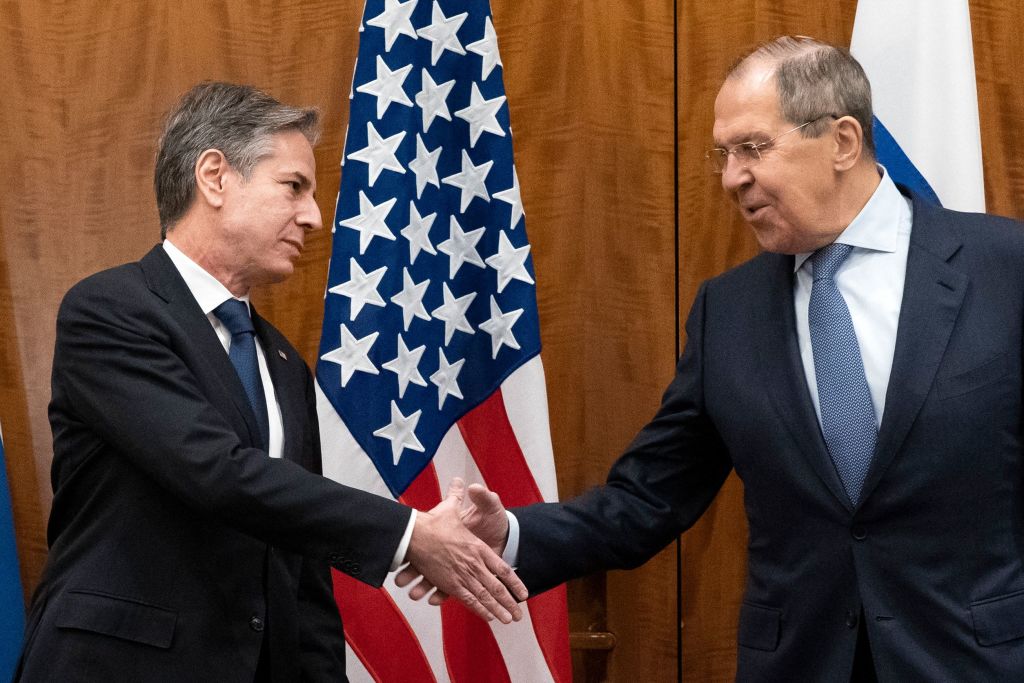 Details about the meeting between Blinken and Lavrov in Geneva cafe 3:35

(CNN) — US Secretary of State Antony Blinken told Russian Foreign Minister Sergey Lavrov on Friday that Washington is committed to a “united, swift and severe response” if Moscow commits a new aggression against Ukraine.

The two senior diplomats finished their bilateral meeting in Geneva on time, which lasted an hour and a half. During the meeting, the US tried to convince Russia to reduce tension on the border with Ukraine, where Russia has amassed tens of thousands of troops and has shown signs of a possible invasion of Ukraine.

“We are, all of us, equally committed to the path of diplomacy and dialogue to try to resolve our differences,” Blinken said. “But we are also committed, if that proves impossible and Russia decides to continue the aggression against Ukraine, to give a united, swift and severe response.”

“This is part of an ongoing effort to de-escalate tensions and prevent further Russian aggression against Ukraine. I have come to consult with allies and partners, as well as with Ukraine itself,” he explained.

Blinken does not relent in his warning about Ukraine

After the meeting, Secretary Antony Blinken gave a press conference in which he reiterated that if Russian forces cross the border into Ukraine, it will be “a renewed invasion” that will have a “rapid, severe and united response from the United States and our partners and allies.

Blinken also said that Russia “has an extensive playbook of aggression without military action that includes cyberattacks, paramilitary tactics and other means to aggressively advance its interests without overtly using military action,” which will also receive a “decisive” response.

In addition, the secretary stressed that the US is “fully prepared” for Presidents Biden and Putin to meet again “if it is useful and productive.”

“If we come to the conclusion and the Russians conclude that the best way to resolve things is through further conversation with each other, we are certainly prepared to do so,” Blinken said.

Blinken said that after the United States shares its written responses to Russia’s concerns, there will be more talks “at least at the level of foreign ministers.”

“It was not a negotiation”

On the other hand, Blinken clarified that his meeting with Lavrov “was not a negotiation” but “a sincere exchange of concerns and ideas.”

“I made it clear to Minister Lavrov that there are certain fundamental issues and principles that the United States and our partners and allies are committed to upholding,” Blinken said.

The secretary said there was “no room for negotiation” when it came to the principle of the “sovereign right of the Ukrainian people to write their own future.”

Russia does not plan to attack Ukraine, says Lavrov

After the meeting, Lavrov gave a press conference in which he assured that Russia does not plan to attack Ukraine, in response to a question from CNN international correspondent Frederik Pleitgen.

“You say that we are going to attack Ukraine, although we have repeatedly explained that this is not the case,” Lavrov said when asked by Pleitgen about a possible invasion.

In this sense, he stressed that Moscow had never threatened Ukraine or its people, despite the massive military build-up near its borders. “Russia never, not once, anywhere, never threatened the Ukrainian people through the words of its official representatives,” he said.

Lavrov talks about the possibility of a Biden-Putin summit

Ukraine notes that Russia has more than 127,000 soldiers in the border region 3:16

On the other hand, Lavrov affirmed that Russia’s contact with the United States will continue and he does not rule out a summit between Presidents Biden and Putin. We are waiting for your official response [a las demandas de seguridad rusas]. We are planning another conversation at our ministerial level,” he said.

He added: “President Putin is always ready to contact President Biden,” but clarified that the two sides were not yet in that position.

“We need to understand what will happen before we go to the presidential level,” he concluded.

Earlier in the conference, Foreign Minister Lavrov mentioned that de-escalation was one of the “major issues” raised by the United States “like a mantra”, referring specifically to Russia’s military build-up around Ukraine’s borders.

“Our American colleagues again tried to prioritize this issue, the problems on the border of Russia and Ukraine as the main problem. They tried to present de-escalation as the main thing, they repeated it like a mantra,” Lavrov said.

“In the end we have agreed that next week we will receive written answers to all our proposals,” he added.

The Russian foreign minister also denied that Ukraine does not represent a threat to Russia.

As part of his comments, Lavrov noted that the US had reiterated arguments about Ukraine’s freedom to choose its own path. “Today we hear some repetition of the arguments about freedom of choice, freedom to choose your alliances and allies,” he said. “We have also shown, in a series of documents, that this freedom of choice must not be achieved at the expense of the security of other countries,” he added.

A breakthrough was not expected.

The two sides admitted before their talks that they did not expect a breakthrough on Russia’s security demands, which the United States and its allies have deemed impossible.

In that sense, Blinken reiterated that he did not expect the United States and Russia to resolve their differences at the meeting. But, he said he hoped to keep a diplomatic track open to address those issues.

“We are committed to walking that path and resolving our differences peacefully,” he said.

Blinken’s meeting with Lavrov on Friday followed his meetings in Berlin with his counterparts from Germany, Britain and France and in Kyiv, where he met with Ukrainian President Volodymyr Zelensky.