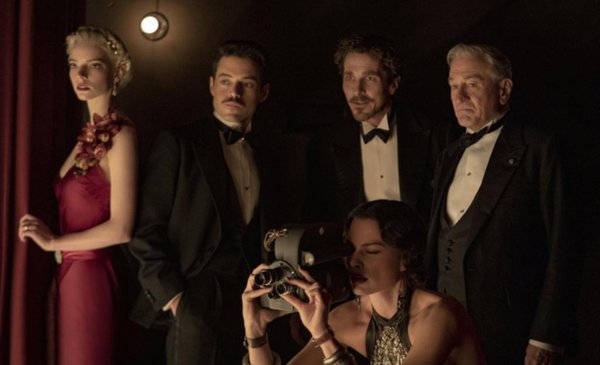 One of the big premieres this week is involved in controversy: “Amsterdam” brings together a cast of great stars, including Margot Robbie, Anya Taylor-Joy, Robert De Niro, Christian Bale, Chris Rock, Michael B. Jordan and to Taylor Swift, in what is the return of David O. Russell to the big screen, after being accused of mistreatment by several actresses and also of sexual abuse by his own niece.

Russell, creator of “American Hustle” and the Oscar-winning “Silver Linings Playbook”, premieres today a black comedy, very much in the style of the writer and producer who usually denounces the “sins” of American society, set in the 30s: it is a true story -with touches of fiction- that follows three friends who witness a murder, for which they become suspects for the authorities. After this fateful event, they discover one of the most scandalous plots in the history of the United States.

A true blockbuster considering the setting of the period and the cast, “Amsterdam” nevertheless arrives in silence, with few press conferences, surely intended to evade questions about Russell, who has clashed numerous times with very high-profile actors. in his shoots because of his temperament and obsessive personality. For example, Amy Adams once recounted that Russell made her cry several times on set. “He was hard on me, that’s for sure. It was a lot”, said the six-time Oscar nominee, who revealed that “she was really devastated on set” and that most days she returned home destroyed after recording in which she shared the stage with Christian Bale, Jennifer Lawrence and Bradley Cooper in “American Hustle.”

What Adams recounts was confirmed by a series of leaked emails from the Sony company in 2014: in one of the messages, a journalist recounted that Russel “abuses Adams so much on the set of ‘American Hustle’ that Christian Bale had to intervene to defend her.” ”.

“His abuse and lunatic behavior is extreme even by Hollywood standards,” the message continues.

Other stars like Lily Tomlin and George Clooney have acknowledged hard crosses with the director. The hunk called his work with Russell on “Three Kings” “the worst experience of my life,” recounting the director yelling at them on set, behavior that was directed “at me often, and every day it was someone’s turn.” . He’d take off his headphones and yell, ‘The sound department screwed me today!’ For me, he came to a head a couple of times.”

Clooney also described how he humiliated a cameraman he knew from school, noting that David embarrassed him in front of the whole set, so he had to intercede by warning him that “you can yell and yell and even fire him, but what you can’t do is humiliate him in front of people. Not on my set, if I have anything to say about it.”

The accusation of his niece

But a more serious accusation was added to the assault at work, in 2012: his niece denounced him for sexual abuse, indicating that he had touched her breasts while they both performed sit-ups in a gym. Aged 19 at the time, the woman, who was not related by blood to the director, claimed that Russell put his hands under her blouse when they were discussing her transition process, which had just begun. According to her, they were talking about the growth of her breasts, when the director tried to touch her after insisting on several occasions, which made her feel uncomfortable. However, she agreed under pressure.

David O. Russell told police that he had indeed touched his niece, but only once when she had agreed to let him do it and then asked him to swear “on my little finger” never to tell anyone about the incident in the gym. A representative for the director stated that “David O. Russell strongly denies any wrongdoing and has fully cooperated with authorities.” The complaint caused Russell to gradually disappear from the scene, while the #MeToo movement grew in Hollywood.

But seven years after “Joy”, his last film, Russell returns with a truly luxurious cast who have agreed to work with him despite the allegations. It is one of the five premieres this week on the local billboard, which adds to a horror, an action thriller, one for boys and a returning classic.

The horror film that adds to the local cinema proposal is “Stairway to Hell”, a film written and directed by Brendan Muldowney (“Pilgrimage”), which follows the story of Keira Woods, a single mother who, in search of a new beginning with his young daughter, he decides to settle in a house far from a wooded area. After a few days, she witnesses situations that she cannot explain and that seem to be of paranormal origin. One day her daughter mysteriously disappears in the basement of the house. With no leads, no other people in the vicinity, and no explanation, Keira searches for a way to find it, only to discover that the home is home to an ancient and powerful entity that controls everything around her. Now, she must face her if she wants to get her daughter back. The film will star Elisha Cuthbert (“The Girl Next Door”) and Eoin Macken (“The Sinister Forest”).

Also hitting theaters is “Last Seen,” which follows the story of Will Spann, who is driving his soon-to-be ex-wife, Lisa, to her parents’ house when she mysteriously disappears. Desperate to locate her, Will turns to the police, who do not help him with her case and even begin to suspect him. Determined to find Lisa, Will plunges deep into the city’s criminal underworld as he escapes from the authorities in this action-packed and intriguing race against time. Directed by Brian Goodman, it has the leading role of Gerard Butler.

For boys, “Tadeo the Explorer 3” is coming to theaters, an animated film that brings back dear Tadeo, who has always wanted to become an adventurous and famous archaeologist and would love for his archaeologist colleagues to accept him as one of the his. The problem is that he always ends up screwing it up. This time, he shatters a sarcophagus and unleashes an evil spell that endangers the lives of his friends Mummy, Jeff and Belzoni. With absolutely everyone against him and only helped by Sara, Tadeo will embark on an adventure-filled escape that will take him from Mexico to Chicago and from Paris to Egypt, to find a way to end the mummy’s curse.

The last release of the week is a comeback: “Blade Runner”, a 1982 science fiction classic, directed by Ridley Scott and Harrison Ford as the lead, returns to the big screen to retell the story of Deckard, a blade runner , a police officer assigned to the removal of illegal replicants. His mission is to hunt down a group of four of these androids, sophisticated NEXUS 6 superior in strength and intelligence to humans, but designed to live a short existence of four years. This group, which has fled a space colony and entered Earth with unknown intentions, is led by the especially dangerous and intelligent Roy Batty (Rutger Hauer).

“Amsterdam” arrives surrounded by controversy: its director was accused of sexual abuse

In addition to “Amsterdam”, a horror, a thriller, one for boys and a classic are released

Previous New York Yankees agreed with former Texas prospect – Full Swing
Next SEERS, the virus that Bill Gates predicted and that would cause a pandemic in 2025 – FayerWayer