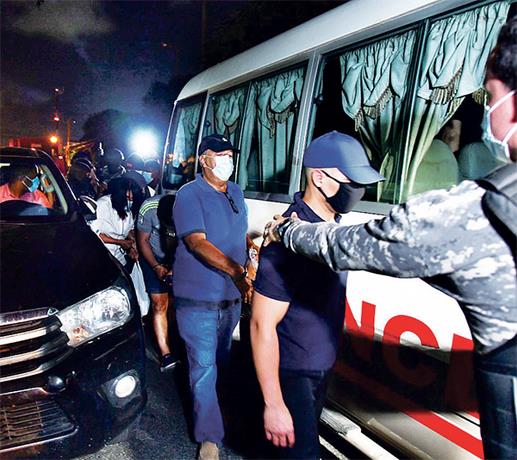 A year ago the battle against accused of corruption began

Operation Anti Octopus, which celebrates one year today, was the first corruption case investigated by the Special Prosecutor for the Persecution of Administrative Corruption (Pepca), under President Luis Abinader’s administration.

Of the five cases of alleged acts of corruption that the public prosecutor has presented measures of coercion in the courts, the Octopus continues to be the most resonant, considering that it involves Alexis and Magaly Medina Sánchez, brothers of former President Danilo Medina.

Also several former officials and relatives, some in prison and others with house arrest, involved by the public prosecutor in the network that benefited from state resources for around RD $ 4.8 billion.

Two days later the Public Ministry requested the declaration of a complex case and the imposition of preventive detention as a measure of coercion against the accused.

While on December 8, 2020, the then judge of the Permanent Attention Court of the National District José Alejandro Vargas, who went to the Constitutional Court (TC), sent seven of the accused to prison, ordered the house arrest of three and released another with an impediment to exit and periodic presentation.

However, on September 9, 2021, the alternate judge of the Third Court of the Instruction Yanibet Rivas, changed the prison by house arrest of Francisco Pagán Rodríguez, Aquiles Alejandro Christopher and Julián Esteban Suriel Suazo, who will be collaborators in the investigation of the case Octopus.

In that same audience, The court granted the Public Ministry until December 3 to present the accusation against Alexis Medina and the other defendants in the Pulpo Case.

Another case is that of the former administrator of the National Lottery Luis Maisishell Dicent, on an alleged fraud in that State institution that affected the private sector.

From persecutor to persecuted

To the group headed by Jean Alain Rodriguez, He is accused of being part of a criminal network of corruption that operated from the Office of the Attorney General of the Republic and that, “we estimate, so far, that he swindled the Dominican State with more than 6 billion pesos,” says the accusatory file of the public ministry baptized this operation as Medusa.

Previous Horoscope: what will happen to your week from November 29 to December 4, 2021
Next Who can be Canelo Álvarez’s rivals for 2022 after facing Ilunga Mukabu?