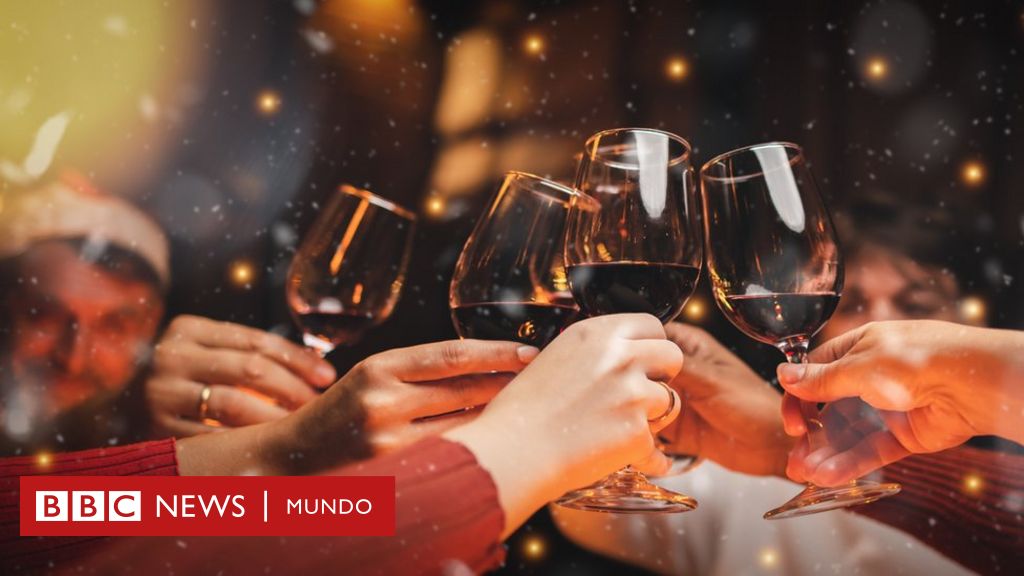 🎼because life is hard, for the end of bitterness. I toast because I forget the reasons why I toast. Here’s to whatever falls into the glass today. Here’s to victory, to a tie and to failure.

The Argentine singer-songwriter Andrés Calamaro reflects in the stanzas of the musical theme “Brindo por las mujeres” the innumerable reasons why we toast.

The toast has the indisputable gesture of raising the glass, although the reasons that justify this movement can be many: celebrate, remember and even (want) to forget.

The term brindis in Spanish has several roots.

The most popular indicates that it has a Germanic origin through the phrase ich brind dir’swhich translates as “I offer it to you or I bring it”.

That phrase came to Spanish through Italian in the 16th century, when the German troops of Carlos V looted the city of Rome in 1527.

They say that the soldiers celebrated their triumph by raising their glasses and pronouncing that phrase.

Of all the year-end rituals, in Latin America and Spain the celebration of toasting is repeated in almost all of them.

But what do we know about this particular way of celebrating? And what are the different ways of toasting in the region?

Here we tell you four characteristics about this ritual that is not missing at every New Year’s Eve party.

1. We toast with alcohol

The toast is the action of drink wine or any alcoholic beverage to wish someone well or celebrate satisfaction for something, defines the Dictionary of the Royal Spanish Academy.

For this reason, wine, cider, sparkling drinks and even beer are the preferred liquids in toasts in Latin America.

Of course, there are very characteristic drinks from each country that appear every 365 days.

For example in Mexico Is taken Punch from December 16 when the traditional celebrations of the posadas begin, before Christmas.

“Mexican punch is fruit-based, the one that predominates is jocote, which is a native fruit of Mesoamerica. When the Spanish arrived they described it as small apples,” he details. Yolanda Garcia GonzalezPhD in History and specialist in food in the 16th and 17th centuries in Mexico.

The expert describes to BBC Mundo that this punch can have guava, tamarind and the hibiscus flower or Jamaica. To that is added sugar cane, raisins and “piquete”, which is a small amount of alcohol added to a non-alcoholic drink. This can be rum, tequila or mexcal, among others.

For his part, in Chili is provided with monkey’s tailwhich is a cocktail made with brandy, milk, coffee, sugar and spices.

And in Uruguay Is taken half and halfwhich is a wine produced from a mixture of sweet sparkling wine and another dry white wine.

Toasting without alcohol in many societies is not considered toasting.

Even in some countries, such as Argentina, toasting with a drink that does not contain alcohol can be synonymous with bad luck. Just like toasting with an empty glass.

Suppose we are lucky enough to eat every day and drink every day. Even so, not provided every day.

It is precisely for this reason that one of the peculiarities of the toast is that the drink chosen to crash the glasses is not usually the one that is taken daily.

“The toast in some way is an exceptionality within a consumption”says Joaquín Hidalgo, an Argentine journalist specializing in wines.

It is known that the ancient Greeks held banquets to celebrate family, city, or different events.

These banquets were called symposiums, which means “gathering of drinkers.” And they consisted of eating and drinking, above all, pure and undiluted wine.

Generally, in the toast a drink is taken that is an exception; that bottle that was saved for a special occasion is opened.

“In PeruFor example, beer is the popular drink par excellence, although there are many others. And the pisco it occupies an interesting ceremonial place,” says Hidalgo, who runs Vinómanos, a portal on the consumption of wines and other beverages.

“In Chilithe bubbles are quite popular, although one of the idiosyncratic drinks to toast is the pisco“, details BBC World.

In Brazil is also provided with beerbut wine is gaining spaces like the crejects.

To toast “in Venezuela there must be on the table a distillate or a Ron above all, and Uruguay is provided with wine or cideralthough the whiskey is the drink par excellence”, describes Hidalgo.

We toast to countless things that are almost always connected to personal moments.

But, curiously, the particularity of the toast is that in all countries we usually toast to the same things.

If there is a special date, it is provided.

In general, it is toasted for relatives (those who are and those who are no longer), for friendship, for health and for the feats of the year.

“In general terms, in this post-pandemic that we are experiencing, a large part of the toasts universally speaking are going to be that we are fine“, says Hidalgo.

And in particular, “I would dare to say that this year in Argentina there will be a strong toast to the Football Championship. I have no doubt about that,” she adds.

In the toast the most frequent thing is to raise the glass and pronounce a word. Very frequently it is: Health!

In this ritual, many clink glasses. It is not known exactly what the origin of this tradition is, because it is a social practice that is very difficult to trace.

The theory, although unfounded, says that the tradition of hitting the glasses arose in antiquity and especially in times of war so that the fluids would mix and thus avoid having drinks. poisoned.

Because if a cup had poison, when it collided with the other, the contents would splash, and all would be contaminated.

In Latin America, since almost everyone has a Hispanic root, there are many similarities when it comes to the characteristics of the toast.

In some countries of the region, glasses are clinked and immediately takes a sip of the drink. If the glass rests on the table without drinking, it is bad luck.

But in others, such as Spain, it is just the opposite. After crashing the glasses you have to support them on a surface and then drink.

“In Andean cultures, for example in Bolivia, the Pachamama is toasted by throwing a splash of that alcohol on the ground. Then the cosmos will also participate in that toast,” Hidalgo highlights.

Yes indeed. In the region offered looking into the eyes of the other. Otherwise, it’s 7 years without sex, they say out there. Unverifiable.

“Basically, it is about signing an act of trust by looking into the eyes of the other because we are doing it together”, analyzes the wine expert.

In Spain it is also provided with the phrase: Up, down, at the center and inside! and it is accompanied by the gesture, almost as if it were a religious symbol.

And in Mexico, in the middle of the 20th century, it became popular “the toast of the Bohemian”.

It is a poem -that was read on the radio- and that describes a toast of six bohemian friends who with whiskey and absinthe recall the hardships and joys of the old year and welcome the new year.

“You had the bohemian’s toast and then you already forgot all the bad things about the year. Then the 12 bells ring and the promises for the next year are said,” says the historian García González.

oh! And be careful to say chin Chin.

Although it may seem like an onomatopoeia, it is the courtesy expression of Chinese origin ching chingwhich means something like “please”.

That word came to Spanish through English, explains the Urgent Spanish Foundation (Fundeu).

But in Japanese, chinchín is commonly used to refer to the male genitalia.

Beyond the anecdotes, customs and traditions that accompany us in this ritual so deeply rooted in our culture, at BBC Mundo we want to take advantage of this article to toast with and for you and wish you the best for 2023.

🎼From a corner of the world, I toast with you, cheers!

Previous The Hollywood stars who stepped on the stick this 2022
Next first steps, tips and tricks, to become a jedi knight