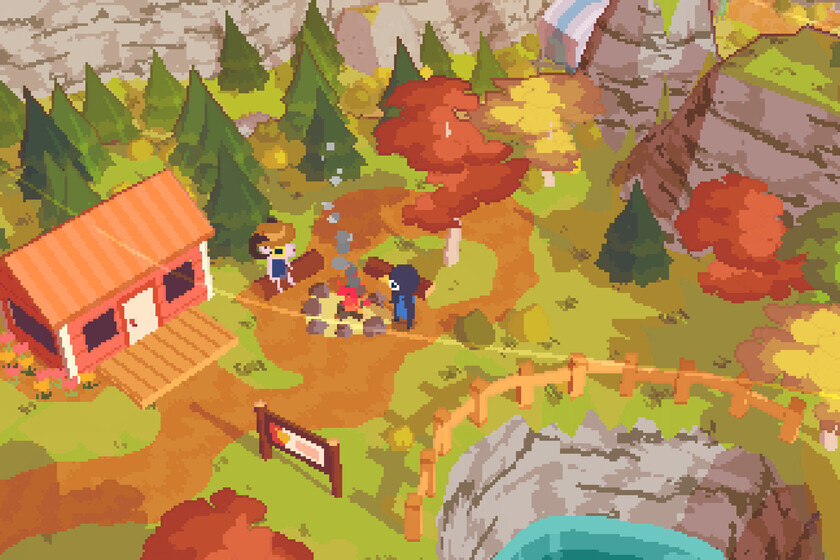 We are in Full Christmas, which means that the holidays embrace us with affection. The best of all? No gifts, being with family or seeing friends, but taking advantage of all the time possible to play as if our lives depended on it. There is no time to lose, so here we have selected a few works that you can spend in a jiffy; between nougat and nougat.

A marvel that transforms one of life’s most insufferable tasks into a therapeutic activity. The best thing about Unpacking is that you can delight yourself with its nice visual design, relaxing music and decorate the different apartments in which a young woman lives to your liking. In about four hours you have ventilated it.

The return of Rare’s mutant frogs was in style in 2020 and it is a fantastic beat’em up in which you will not only get involved with slaps. And it is that beyond releasing the occasional hook to the jaw, in Battletoads you will find bizarre mini-games and a good dose of humor. Of course, you can play it in cooperative mode with friends or family to finish it in just five hours.

We love fantasy worlds, although most of the time they are set in a medieval context. In the case of coffee talk, we will act as a bartender in a place full of elves, trolls, fairies and all kinds of magical beings, but today. Listen to their problems, take note of their lives and offer them the best drink to make their day splendid. In just four hours you will be a coffee expert.

The work of playdead it is one of those that disturbs, amazes and remains etched in the retina forever. Little can be said about Inside without revealing the real cake, but suffice it to say that the world that the game draws is one in which we would never want to live. If you want to discover the truth of what is happening, it will take you three and a half hours.

The lost son of DOOM, but released in 2022. Prodeus It is a love letter to the FPS of a lifetime, the one that emerged with murderous fury during the 90s. Don’t let the pixelated aspect throw you off, you are facing a game that will really make it difficult for you. You will sweat like hell for over six hours.

The one that Pillow Castle offers us is a great puzzle title, since it gives a twist to the usual formula of the genre. We will not have to stop dead to solve puzzles in Superliminal, but we will have to play with perspective and platforming to overcome areas full of imagination. Your brain will smoke for a little over two hours, if you don’t get stuck.

Perhaps the best beat’em up that has appeared this year. Dotemu had us biting our nails to deal slaps with Donatello, Raphael, Leonardo, Michelangelo and company. A very complete set of characters awaits us to hunt down the Shredder and his minions, being able to play up to six people both locally and online. In three hours you will master all the techniques.

Grab your headphones, insert them between your ears and enjoy the whole experience. Tetris Effect: Connected is one more variant of legendary title of Alexei Pazhitnov, but this time it is committed to a brutal environmental component. The music will envelop you with each piece you place while you find the challenge of a lifetime that you are hopelessly hooked on. The main levels can be yours in three hours.

The one that Skookum Arts puts on the table is a very curious proposal, since it takes everyday objects such as warning and danger signs from the street to play with. In The Pedestrian we must advance through a city by hitting an urban sign, but having to solve different puzzles in each one of them. Four hours and you can mark it as finished.

His campaign is absolutely legendary and it is not for less. A shame that the Respawn Entertainment franchise is more dead than alive, because Titanfall 2 is a gamer. Enjoy levels full of frenzy in which temporary changes are the daily bread. In six hours you have shot everything that moves.

The big reveal of 2022, taking that distinguished award with all of the law. Vampire Survivors is absolute simplicity, since we can’t do anything with our character beyond moving. However, the juice of the title is found in the abilities that we choose each time we level up. Waves of vampires, werewolves, and whatever hell you can imagine will come after you mercilessly. In just over eight hours you can finish it, but its roguelite base allows you to play games from time to time without looking at the time.

It’s four hours that To the Moon lasts, but what Freebird Games has managed to condense into such a short space of time is a fantasy. Two doctors go through the memories of a dying man to artificially fulfill his last wish. With such a synopsis, you already know that you must have a good box of tissues by your side. Four hours and it’s yours.

What Remains of Edith Finch

Anything that bears the Annapurna Interactive stamp is welcome and What Remains of Edith Finch fits that perfectly. A young woman returns to her family’s house to remember not only her past, but that of the rest of her family who died under strange circumstances. Are you telling me you don’t have a couple of hours for an exquisite narrative adventure?

Calculating the time it takes you to finish A Short Hike is relative. In less than ten minutes you can roll the credits and be so wide, but in reality you’ll be missing the fabulous universe that hides the island you are on. Curiosities of all kinds, moments full of tenderness and a peaceful experience.

Beautiful as he alone, precisely loneliness is not always the best of options. In Firewatch he plays a rookie ranger whose only company is his partner several kilometers away and with whom he communicates only by radio. Take care of the place that you have had to protect and maybe you’ll find out what the hell happened there years ago…

Lucas Pope It’s not that he has an extensive collection of released games, but his mastery when it comes to designing video games is excellent. With Papers, Please puts us in the difficult task of acting as a border guard checking passports, which will lead to the dichotomy between helping people or continuing to act with an iron fist as the dictatorial regime does. In five hours you can review all the documentation.